Here at Softonic, we tried out PES 2014 (or Pro Evolution Soccer 2014, to give it it’s full title) a month before the release of the demo. This alpha preview gave us a good sense of what Konami will have in the full release of the game. While we’re certainly excited about the game in the San Francisco office, it doesn’t even compare to the fervor expressed by our Italian colleagues. That’s why we turned to the expertise of Daniel Barranger and Alessandro Licitra, who went toe-to-toe on the virtual field. The two expressed hugely different opinions about PES 2014, and we’ve chronicled their impressions of the updated gameplay, graphics, physics, tactics, and more.

Alessandro – Pro Evolution Soccer’s new graphics engine, Fluidity, performs great. Close-ups of the players are awesome, with the virtual avatars really resembling their real-life counterparts. I also had the feeling that the spectators and banners in the stands, not to mention the photographers on the sideline, make the whole game more energetic. In short, PES has great scenery.

But what impressed me most in this first hands-on of PES 2014 are the sound effects. Konami has done a superb job, not only with the classic chanting from the stands, but because the audience actually rallies the teams: they incite, encourage, and increase in intensity as you approach the goal, giving support at critical stages of the match. They don’t miss the opportunity to boo dubious referee decisions or when the rival team is on the attack.

The crowd’s presence is constant throughout the match. My advice? Pump up the volume and enjoy the game: it feels like you’re really in the stadium! 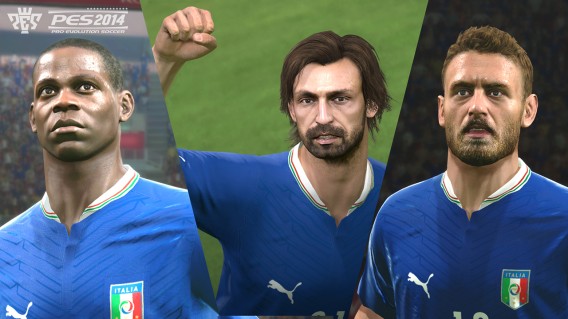 Daniel – Honesty, there isn’t a lot to complain about. The graphics continue to improve, and the spectators and players still look much better than FIFA.

There are some flaws: players’ eyes seemed ill-defined. Practically only the pupil is visible, and making their faces less expressive. The transition to play after a foul also seems a bit lacking, but it’s probably due to the fact that the demo is an alpha build.

Despite being able to recreate a real stadium atmosphere, there is no denying that the artificial sounds get repetitive. Playing at home and four goals behind, we scored a consolation goal and the audience burst into a surreal roar: when would that happen in a real game?!

Daniel – Comparing PES 2014’s physics with Pro Evolution Soccer 2013 can be likened to effect of the Impact Engine in FIFA 12. On-pitch collisions are now much more realistic.

Another long-awaited feature is the new ball physics, especially noticeable when players run with the ball. That “bowling ball” effect where the ball made strange unrealistic bounces or slides is now gone. What’s more, the ball is no longer “glued” to the player’s foot and behaves much more naturally.

The animation of the players’ movements are more realistic than ever. Gone are the abrupt changes of direction – now movements are smooth and harmonious. The action on the field is becoming more like what you see in a real soccer stadium. 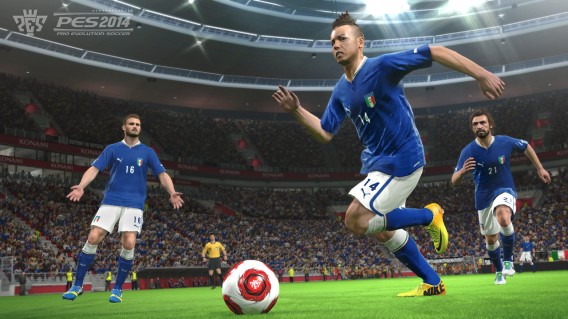 Alessandro – I agree with Daniel, but with some reservations. It is true, the physics and animations are an improvement on PES 2013, but sometimes after a collision, the ball remains almost stationary between the two characters. Though rare, it’s very jarring. Players falling to the ground is also rather unrealistic, comparable to falls we saw back in FIFA 12.

I agree with Daniel about changes of direction, even if sometimes the ‘gap’ between the run and the precision control is a bit too clear-cut and slows down the action. Then there are the shots: both the powerful and the precise ones look great, but sometimes the trajectories don’t make sense; I saw shots that were heading out turn towards the goal at the last second.

Daniel – If I had to sum up Pro Evolution Soccer 2014 in two words, especially when compared to last year’s installment, I would say “elegance” and “spectacle.” The refined and precise controls (using the L2 or LT along with the joypad) have been greatly improved, and really allow you to dance around the field.

PES has always focused on the action on the field and on the players interacting, but this year Konami has really topped their previous efforts. During our test we saw many Philipp Lahm-style overlapping moves and some of our kicks had a real flavor of Xavi Hernandez about them.

Free kicks and cornering have improved thanks to a visual trajectory that’s adjustable with both sticks. In addition, you can always establish the direction where you want to send the ball with the right stick. With the left stick you can adjust the effect and height. The new system makes it easier to direct free kicks and corners, without abusing the system and scoring a goal every time. 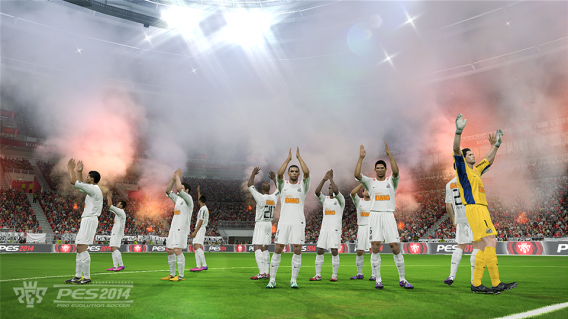 Alessandro – Some movements seem a bit floaty and not always like you have control over the movements of the player.

PES 2014 highlights how moves look – and it is beautiful – but the actual gameplay is slow and sometimes cumbersome – though it’s still better than PES 2013.

The referees were unconvincing: they seemed strict and punished the players very easily. Disappointingly, they don’t apply the advantage rule correctly (a problem inherited from PES 2013. It’s surprising Konami didn’t solve this issue).

Daniel – The big gap between PES and FIFA was because of the goalkeeper’s AI and abilities in the hands of players. Konami has made remarkable improvements this year. Goalies are no longer superhuman with impossible saves, having become much more consistent and realistic than in previous installments.

In PES 2014, goalkeepers will sometimes deflect the ball with almost imperceptible touches, preventing rampant scoring, while many other times they barely miss, letting the ball slip through their fingers and gifting a goal to the opposition. 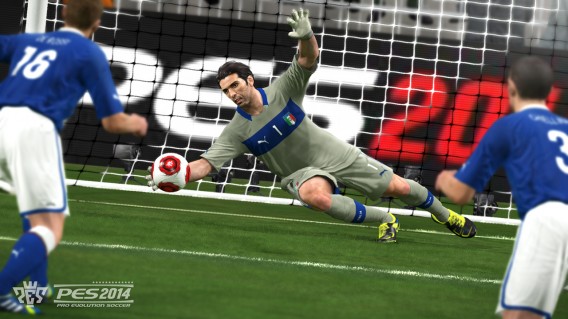 Alessandro – That’s very true; some interventions are truly spectacular and I admit that my jaw dropped on several occasions.

But the real problem is when the goalies leave the 18-yard box: I saw high balls easily miss on crosses, and if you opt to manually exit the box (Y button on the Xbox joypad) to face a striker, the goalie moves slowly and clumsily. Yet, in modern soccer, a fast goalie is crucial.

Alessandro – Managing tactics has always been one of PES’s strengths, but the 2014 version perfects this aspect further. You can tweak them however you like, modifying players’ moves in the excellent editor. You’ll also be able to choose which players to advance from the rear to aid in the attack (this is useful for taking advantage of attack-minded full-backs like Daniel Alves).

On the strategic side, you can change values such as pressure, height of the defensive line, the size of the team and more. But the real nice touch is the Strategy integrators. This feature, a configurable menu of tactics and strategies, visually divides the field into multiple regions. For each section, you can ask the players in that area to perform specific movements (diagonal cuts, overlapping, and so forth).

On the field, the Strategy indicator is activated by pressing LT twice (Xbox joypad), but only when the symbol appears on the monitor.

PES 2014 allows more experienced users to configure up to 3 strategic presets that can be used at any time during the game. Each preset combines tactical play and different strategies.

Too much? Don’t worry! If you’re not an expert in the field, PES 2014 also allows you to entrust the task of adapting the strategy to the AI, based on the evolution of the match. 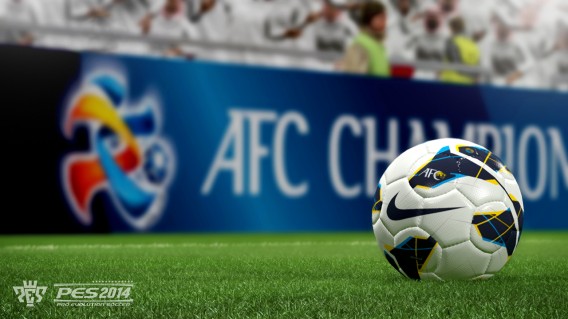 Daniel -PES has always had its strategy system and menus on its side. This year, however, I fear that the default tactics available are too few, especially when compared to those available in FIFA.

There appears to be only 11 formations, though you can also manually alter the position of the players and change the default tactics. While it might work for more experienced players, the system is very unwieldy for casual players who might be more comfortable with a greater range of default patterns.

In addition, the depth of the strategies is verging on too complex. It’s hard to constantly manage them all. My overall impression is that the tactical menus aren’t as immediately useful and as user-friendly as those in FIFA.

Remember, these were our first impressions playing with a preliminary version of Pro Evolution Soccer 2014 – we’ll still have to wait for the final release.

Do you think that PES 2014 has what it takes to unseat FIFA 14 as the top soccer simulator, maybe even beating it to the best of the year?

If you liked this article then you'll love our newsletter!

Join us to receive hilarious memes, photo galleries, tips&tricks, and the best games!